It doesn't take long to fall behind when posting here when so many good things are happening. Just since the last post, here is a sample of the good things going on in Plainville:

So, don't let the naysayers get away with being negative. Emphasize the positive.

Posted by Get Plainville at 12:12 PM No comments:

If you have not already taken a "Dive into the Facts" to get a true picture of the need for a new swimming pool in Plainville, take the time to research the issue before the August 3 vote. Brochures have been prepared that give very clear explanations of the current pool condition, and why the city feels we need a new pool.

Stop by the city office to pick up a brochure or call Mayor Kelli Hansen, or any city council member if you would like to know more.

The election is August 3rd.
Posted by Get Plainville at 6:53 AM No comments:

Paradise Creek Festival offers something for everyone

The 2010 edition of the Paradise Creek Festival is quickly approaching, and it promises once again to have a little something for everyone. The festival dates for 2010 are June 11-13.

For a full list of events and locations, go to www.plainvillesaddleclub.com and click on the Rodeo and Festival link.

For more information on what there is to see and do in Plainville, visit the following websites: www.rookscounty.net, or www.getruralkansas.org and click on Plainville in the drop down menu.
Posted by Get Plainville at 9:39 AM No comments: 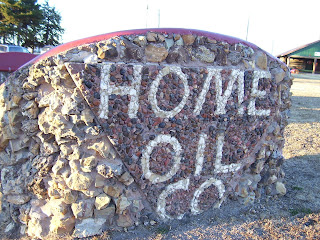 The park benches you find in the Plainville City Park, located on a city block surrounded by Mill, Cochran, Section Line, and S. First streets, are a remnant of the days when travelers along highways would need resting spots.

These park benches were actually constructed as part of a pocket park located at Mill and Broadway, along what was at one time the Red Line Road, later to become Kansas Highway 18 (before it was moved north of town). The benches were constructed in the early 1930's in the pocket park of the old Home Oil Company and then moved to the City Park after World War II.

Credit for the building of the pocket park and the benches is given to John Hilgers, Sr., and Harvey Shaw. John reportedly worked on posts and benches for hours and would come home with his fingers raw and bleeding.

Some of the product for the benches was imported from Nebraska.
Posted by Get Plainville at 2:35 PM 1 comment: