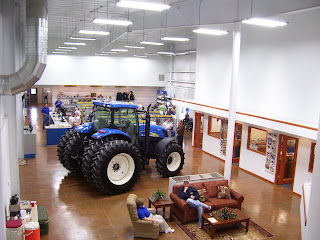 After serving farmers and ranchers from the same location on W. Mill Street in Plainville since 1947, Farm Implement & Supply Co. has expanded to a new, more visible location on S. Washington (U.S. Hwy 183). The formal grand opening was held on Monday, March 21.

The new location has been the site of several businesses, but the building has been expanded considerably, and given a new fresh look with the blue and yellow New Holland colors prominently featured. The expansion also features increased space for retail and for equipment repair.

Farm Implement was incorporated in 1947, with Harold (Ike) Gilliland hired as manager. He later became the sole owner in 1954. Ike's two sons, Barry and Ron, managed the store for many years, and now it is run primarily by Ron's son, Todd.

Congratulations to Todd and all the employees on the grand opening.
Posted by Get Plainville at 12:17 PM